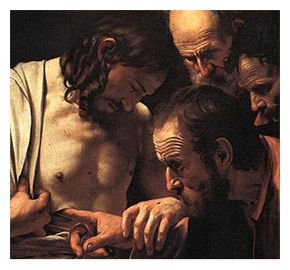 1 The first day of the week cometh Mary Magdalene early, when it was yet dark, unto the sepulchre, and seeth the stone taken away from the sepulchre.

2 Then she runneth, and cometh to Simon Peter, and to the other disciple, whom Jesus loved, and saith unto them, They have taken away the Lord out of the sepulchre, and we know not where they have laid him.

Startled, Mary Magdalene runs to Peter and John to give them this news.

3 Peter therefore went forth, and that other disciple, and came to the sepulchre.

Peter and John run to see for themselves.

4 So they ran both together: and the other disciple did outrun Peter, and came first to the sepulchre.

5 And he stooping down, and looking in, saw the linen clothes lying; yet went he not in.

6 Then cometh Simon Peter following him, and went into the sepulchre, and seeth the linen clothes lie,

When John stopped and Peter caught up and continued in.

7 And the napkin, that was about his head, not lying with the linen clothes, but wrapped together in a place by itself.

8 Then went in also that other disciple, which came first to the sepulchre, and he saw, and believed.

John had stopped, but has now run in right behind Peter and the both of them immediately understand what has happened. Christ Jesus has risen, just as He said He would.

9 For as yet they knew not the scripture, that he must rise again from the dead.

They're there in the tomb, witnessing the fact, He has risen! The lessons they have leaned with Christ are hitting hard in the minds of John and Peter about now.

10 Then the disciples went away again unto their own home.

11 But Mary stood without at the sepulchre weeping: and as she wept, she stooped down, and looked into the sepulchre,

Mary Magdalene is crying as she bends down to looked into the tomb.

12 And seeth two angels in white sitting, the one at the head, and the other at the feet, where the body of Jesus had lain.

Here we have two messengers of God sitting where Christ had laid. Many expect angels to have wings and to glow in the dark, but we are made in the image of them and God. Although we look the same, our make is a bit different because we age, get sick and can die, where they don't. The DNA structure, genetics and elements are just a bit different. If you don't understand this, put it on a shelf. It has no bearing right now.

13 And they say unto her, Woman, why weepest thou? She saith unto them, Because they have taken away my Lord, and I know not where they have laid him.

She is very upset and believes someone stole the body of Christ.

14 And when she had thus said, she turned herself back, and saw Jesus standing, and knew not that it was Jesus.

She's walking out of the tomb where she had been talking with the two messengers of God, the tears still filling her eyes, distorting her vision and there stood Christ Jesus.

15 Jesus saith unto her, Woman, why weepest thou? whom seekest thou? She, supposing him to be the gardener, saith unto him, Sir, if thou have borne him hence, tell me where thou hast laid him, and I will take him away.

She loves Christ deeply and will take His body and bury Him herself. With tears rolling down her face, she asks Christ "what did you do with His body?"

16 Jesus saith unto her, Mary. She turned herself, and saith unto him, Rabboni; which is to say, Master.

She realized it was Christ and gained control of her sadness turning it to joy. "Turned" = στρέφω stréphō, stref'-o; strengthened from the base of G5157; to twist, i.e. turn quite around or reverse (literally or figuratively):—convert, turn (again, back again, self, self about) metaph. to turn one's self from one's course of conduct, i.e. to change one's mind.

17 Jesus saith unto her, Touch me not; for I am not yet ascended to my Father: but go to my brethren, and say unto them, I ascend unto my Father, and your Father; and to my God, and your God.

This is kind of mistranslated here. What Christ is telling her is don't hold me up, for I am not yet ascended to my Father. Why hasn't Christ been to our Father? He went to all those that had died before His sacrifice, so they too could chose Him or not.  1 Peter 3:18-20  18 For Christ also hath once suffered for sins, the just for the unjust, that he might bring us to God, being put to death in the flesh, but quickened by the Spirit:  Christ showed us, as REAL Christians we know we can handle whatever may come because we look for that day this flesh is no more.  19 By which also he went and preached unto the spirits in prison;  If they put you in prison for preaching The Truth, physically or metaphorically use it as an opportunity to do God's Work.  20 Which sometime were disobedient, when once the longsuffering of God waited in the days of Noah, while the ark was a preparing, wherein few, that is, eight souls were saved by water.  Many are given the opportunity to choose and few want the right choice. They want the ground rather than The Way to be saved. There are a flood of lies in the world today. Only The Word can bring you to safety.

18 Mary Magdalene came and told the disciples that she had seen the Lord, and that he had spoken these things unto her.

19 Then the same day at evening, being the first day of the week, when the doors were shut where the disciples were assembled for fear of the Jews, came Jesus and stood in the midst, and saith unto them, Peace be unto you.

They're having church and Christ is there telling them to calm their fears. Those kenites want nothing more than to stop the rise of Christianity, but with Christ in you, the power to get things done is there also. Faith†

20 And when he had so said, he shewed unto them his hands and his side. Then were the disciples glad, when they saw the Lord.

They had feared this man appearing with them was a kenite; but Christ reassured them He wasn't by telling them "Peace be unto you" and by showing them the piercings wounds on His body, that He is Christ Jesus, The One that died for them.

21 Then said Jesus to them again, Peace be unto you: as my Father hath sent me, even so send I you.

Christ reassures them again, "Peace be unto you". He was sent to them from our Father that they will hear it from The Son, that they're now to be Apostles of Christ Jesus. "Apostle" = ἀπόστολος apóstolos, ap-os'-tol-os; from G649; a delegate; specially, an ambassador of the Gospel; officially a commissioner of Christ ("apostle") (with miraculous powers):—apostle, messenger, he that is sent.

22 And when he had said this, he breathed on them, and saith unto them, Receive ye the Holy Spirit:

With The Holy Spirit in you, nothing can hurt you physically or mentally. You're ready for whatever may come because you understand this life is but a short time and there is work to be done in The Lord. You understand your life isn't of this flesh age but the next.

This is a matter of an individual's conviction within themselves. When you feel you're ready to ask for forgiveness, The Holy Spirit is there. When we ask of it in Christ Jesus Yahshua's name, at that instant, The Holy Spirit enters you. You have been forgiven and your past is done. You're a new person, born from above.

24 But Thomas, one of the twelve, called Didymus, was not with them when Jesus came.

Thomas missed out and because of that he has become "doubting Thomas". Christ is about to tell us something very important. Ref. verse 29.

26 And after eight days again his disciples were within, and Thomas with them: then came Jesus, the doors being shut, and stood in the midst, and said, Peace be unto you.

Christ appears in the middle of the room again, eight days after Thomas doubted his brothers and sister in Christ of His appearing to them. The biblical numeric #8 = new beginnings.

27 Then saith he to Thomas, Reach hither thy finger, and behold my hands; and reach hither thy hand, and thrust it into my side: and be not faithless, but believing.

28 And Thomas answered and said unto him, My Lord and my God.

Now doubting Thomas has become believing Thomas. He had witnessed many things while walking with Christ and even seen Him crucified, but it took putting his finger in the holes made in the body of Christ for him to believe Christ had truly resurrected and stood before him. If people would just open their eyes to what's around them, they would see God's creation. If only they would open their minds, they would see The Truth that has been there all along. FAITH †

29 Jesus saith unto him, Thomas, because thou hast seen me, thou hast believed: blessed are they that have not seen, and yet have believed.

30 And many other signs truly did Jesus in the presence of his disciples, which are not written in this book:

They're written throughout the other Gospels.

31 But these are written, that ye might believe that Jesus is the Christ, the Son of God; and that believing ye might have life through his name.

God has revealed Himself to us all through His Word and His creations. It's up to each of us to see Him. Humans have faith in many aspects of their lives. They take those things for granted everyday their feet hit the floor. When you're awake to The Truth, your faith has become forefront in your daily walk. You don't have to touch Him, you can feel Him. That confidence you have with that peace of mind that keeps you going no matter what comes on you, that is Him living in you. That's your faith in The Truth. †